The good news: Penn State plays Saturday for the Big Ten championship and a very real shot to play in the College Football Playoff. News, at least of the type that I could be writing about on a forum like this, doesn't get much better than that.

The bad news? After a four-week stretch of impossibly good football that made him a darkhorse Heisman contender, Saquon Barkley has faded. He's averaged less than 2 yards per carry in two of the past three weeks, culminating in last week's 12-carry, 14-yard ugliness. The performance at Indiana might have been worse, as the team was asking him to carry so much of the burden – 33 carries for 58 yards is less an indictment on Barkley than on Joe Moorhead and the offense for initially failing to move on from a gameplan that clearly wasn't working.

To Moorhead's credit, that hasn't happened often – last week, with Michigan State selling out to stop the run, Trace McSorley just dunked all over the Spartans secondary. Good things.

Speaking of good things: Trace McSorley. I've been as hard on the dude as anyone, but he's had a season that exceeded any of our greatest expectations. Twenty-two total tuddies against just eight total turnovers, rewriting the record books, and so on. But...he hasn't been perfect – not that we should expect perfection. Unfortunately, Wisconsin presents a real challenge for Joe Moorhead, as they've proven all season that they can stop the run without having to sell out. And that's how you end up with a defense that ranks No. 9 (in S&P+) against the pass and No. 17 against the run.

Let's start with that first part: Wisconsin is really, really good at defending the pass. Opponents are completing just 50.7 percent of their attempts against the Badgers, third in the Big Ten (for comparison, PSU's pass D allows a whopping 61.2 percent completion rate, 12th in the conference). Wisconsin's allowed a B1G-fewest eight passing touchdowns, and leads the conference with 21 interceptions. All of this is to say, the completions won't come easy for Trace McSorley on Saturday, and he's going to be in trouble if he can't complement the downfield passing game with quick, easy completions...

...and that's kind of the problem. It hasn't been as much on a game-to-game basis as much as a drive-to-drive one, but this offense has succeeded on the strength of all-or-nothing plays: it's how McSorley ranks ninth in the country in yards per attempt, and 95th in the country in completion percentage (among 119 qualified passers). Penn State's offensive passing game is also fairly inefficient – it is third in Passing S&P+, fourth in Passing IsoPPP, and 71st in Passing Success Rate.

Because this offense is so reliant on the home run, we've seen Trace put up some big numbers this season, but he's generally done it against bad defenses. He's been fairly consistent all season long, but generally, he's done well against good pass defenses and struggled against bad ones. A caveat for the chart below: I removed Purdue, both because there was so much garbage time and because it just skewed everything. But anyway: 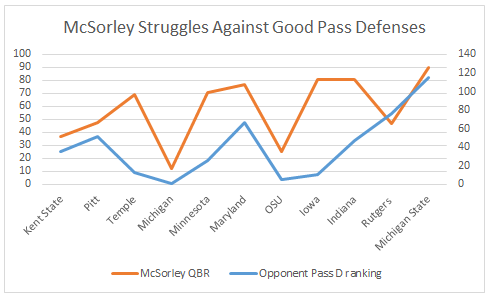 I'm using QBR, even though it's a flawed stat, and S&P+ for defense rankings. Take issues with these choices all you want. Anyway, the point is this: Against top-10 pass defenses like Ohio State and Michigan, McSorley had easily his worst games of the season. (Also, against Rutgers, but credit the weather more than Rutgers' #76 passing defense for slowing down the Penn State offense. And because QBR weights for clutchiness, McSorley gets a lot of credit for a Minnesota game in which he completed 46 percent of his passes.)

When Trace was awesome, it generally came against poor defenses like Michigan State and Maryland. Now, the Iowa game is the best (and only real) example of him bucking this trend: Iowa finished the season ranked 11th in S&P Pass D, and Trace had a methodical 240 yards on 11/18 passing with 2 tuddies and no picks. It was delightful. Remove the Iowa game, and the trend is even more stark.  We can't expect a repeat of that in Indy, and given how good Wisconsin is against the pass, we likely can't expect McSorley to carry this team on Saturday.

This brings us back to Saquon Barkley. There's a similar trend that predicts Barkley's success on the ground, but, oddly enough, it has nothing to do with how good the opponent is against the run. Barkley ran for 8.3 YPC against the No. 16 rush defense of Ohio State and 1.2 YPC against No. 52 Michigan State. No, folks, Saquon Barkley doesn't need to play a bad defense to get his. He needs Trace McSorley to hold on to the ball on some of those read options. 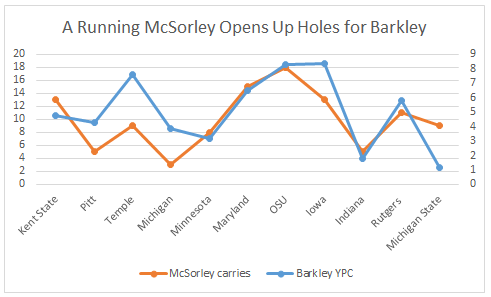 Obviously, there are confounding variables at play. McSorley hasn't been able to keep the ball as much in recent weeks because he's been banged up. Penn State has been playing behind second- and third-team offensive linemen – the loss of Brendan Mahon, especially, has limited Saquon's ability to bounce outside and hit some of those home runs like he did against Purdue (again, removed from the data set) and Iowa. That those two elements coincided, as they did prior to, during, and since the Indiana game, explains why Barkley's tailed off and why McSorley's keeping it less. And obviously, not all of these McSorley carries are read-option keepers: there are other designed runs and scrambles in there, too (this data removes sacks).

But anyway, the point remains: in an offense so reliant on options – be they read, run-pass, or simple pitch options (all of which we've seen this season) – the defense can key in on Saquon Barkley if they're not afraid of Trace McSorley keeping the ball. Saquon's had his most success when Trace has most often kept the defense honest. Even if they're not all read-options, the more Trace McSorley has run the ball, the more room Saquon Barkley has had to run.

Last year, we rolled our eyes as John Donovan called read options knowing that Christian Hackenberg would invariably hand off. Too few keepers from Trace, and we're nearing the same position, especially given that almost every Saquon run this season has contained the option for McSorley to pull back. Part of this is contingent on how defenses play read options, obviously, but an aggressive Trace will lead to a successful Saquon.

Basically, here's the tl;dr of it all: Trace McSorley likely isn't going to have a monster game throwing the ball on Saturday. The Wisconsin pass defense simply is too good for that. But he's still going to play a crucially important role. In order for Saquon Barkley to carry this team to a Big Ten Championship, McSorley has to carry the ball as often as possible.

This is a forum post from a site member. It does not represent the views of Roar Lions Roar unless otherwise noted.