Penn State welcomed their four newest members of the Nittany Lion football program this week as they enrolled early for the Spring semester. Today, we highlight K.J. Hamler. 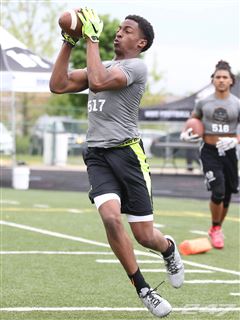 Once healthy, Hamler will be a weapon for the Penn State offense. (Photo: 247Sports)

Perhaps more than any other prospect in Penn State's Class of 2017, K.J. Hamler's commitment shows the impact of the Lions breakout 2016 season. Sure, Hamler was high on PSU going into the year, but the opportunity to play in Joe Moorhead's offense and for a winning program on the right trajectory played a major role in pushing Penn State over the top.

Hamler hails from the Detroit, Mi. area, spending his first three years of high school at Orchard Lake St. Mary's. If that name sounds familiar, it is the high school alma mater of former Nittany Lions Allen Robinson and Rob Bolden. Hamler transferred to IMG Academy for his senior season. He unfortunately missed basically the full season after tearing his ACL in his first game in Florida.

When healthy, Hamler will give Penn State's offense and return game an element it has been missing. Yes, Hamler has track type speed, but he also has the "wiggle" to make guys miss. That element will not only benefit PSU on offense, but most definitely on kick returns. It has been some time since the Nittany Lions have had a player with quite the same skill set as Hamler.

It seems likely that Hamler will take a redshirt this fall, as he will be just 12 months removed from ACL surgery when the season opens. Combine that with the depth ahead of him on the depth chart, the extra year to return to full strength feels like an inevitability.